I can admit when I’ve made a mistake and lately I had let Silvia fall into a food rut. Cries for macaroni were met with, well, macaroni. And “cheese please” brought on cheese. Lots of yellow, brown and white foods with vegetables and fruit for color but not a whole lot beyond green beans, peas and blueberries.
But I’ve broken the rut!!! We’re out!
I simply ignored the requests I’ve been hearing for months and last week plated up vodka sauce (don’t worry….the alcohol cooks out) with grass fed ground beef. This was the first time she actually liked red sauce….I mean, come on, what child doesn’t like marinara sauce?!
Last night it was salmon with dill, potatoes and green beans. And tonight she devoured slow cooked organic pork and about 5 helpings of black beans that had been simmering in anticipation of just such an appetite all day. Along with cucumber slices and blueberries for dessert.
Toddler food ruts are common and we have battled a few illnesses lately but I am supposed to be the “Queen of Green” afterall.
I’m just glad Silvia is cooperating in maintaining my image. 🙂 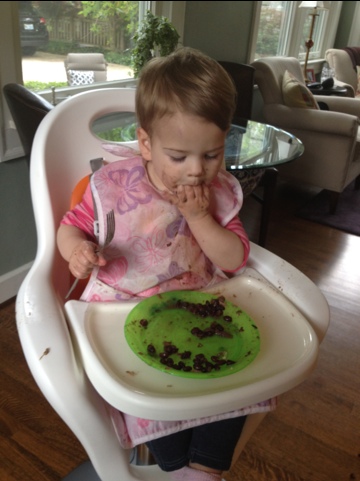 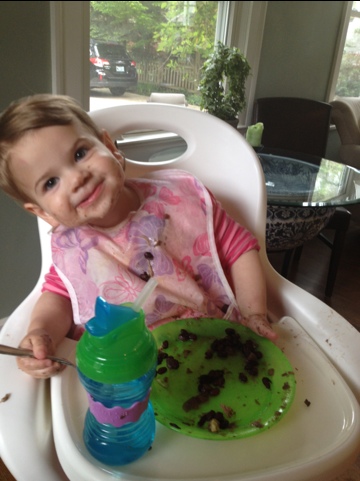 I can’t possibly be the only one experiencing this.  But it’s blowing my mind…hilarious!

Taking pictures of herself

Every once in a while, usually to fend off a meltdown, I’ll hand Silvia my iPhone.  I always lock the keyboard so she can’t wreak total havoc (deleting apps, calling people…you know the drill).  Even still, she knows how to double-click the home button until the camera icon comes up.  Then she hits the button in the top right that swings the camera around so that it’s facing back at her.  Then, after she clicks the shutter a few times and snaps some photos, she hits the button in the bottom left that allows her access to the library of photos she just took and she sits there scrolling through, using her finger to “flick” her way through pic after pic as if she had been doing this all her life.  Which, in truth, she pretty much has.

More pics all by myself

But here’s the real kicker.  When I get the phone back, I find that my photo library is chock full of pictures that look like this.

A brief period of time that is uncharacteristically delightful 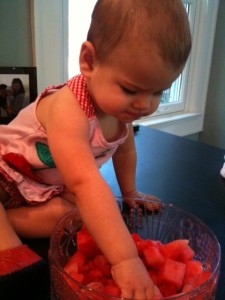 About a week ago, I found Silvia and I in what I will from here until eternity call a “watermelon moment.”  I had just finished chopping another big watermelon (we go through them weekly here) and had a bowl of the ripe, juicy fruit sitting out.  I popped Silvia up onto the counter so I could put her shoes on (I know, up on the counter is not a smart safety move with a wiggly toddler….just don’t tell her dad, Mister Safety) and she made herself right at home with that bowl of watermelon.

No sooner would she grab one big chunk than she’d take a bite and set it aside and dig in for another.  This went on for minutes amidst much “mmmmmm”ing and exclamations of “numm, numm!”  So at home was she with that big bowl of watermelon, it was as if the whole world was a bowl of melon just for her.  What could I do but grab my iPhone and snap a few pictures?! 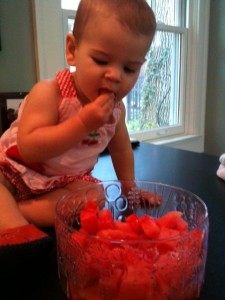 Some day she’ll be too big to plop up on the counter top.  And some day even sooner, much to our dismay, watermelon will be out of season and we won’t be able to enjoy our favorite food on a daily basis.

Did I mention, by the way, just how much watermelon we eat around here?!  I had to stop myself from eating a whole one, by myself, every day while I was pregnant…. better that than milk shakes, I figure.  And Silvia would come close to that if I would let her.  Soooooo, I’ve decided it’s only fitting that she dress up as a big, ripe watermelon for halloween.  Just ordered the costume.  Stay tuned for those photos!